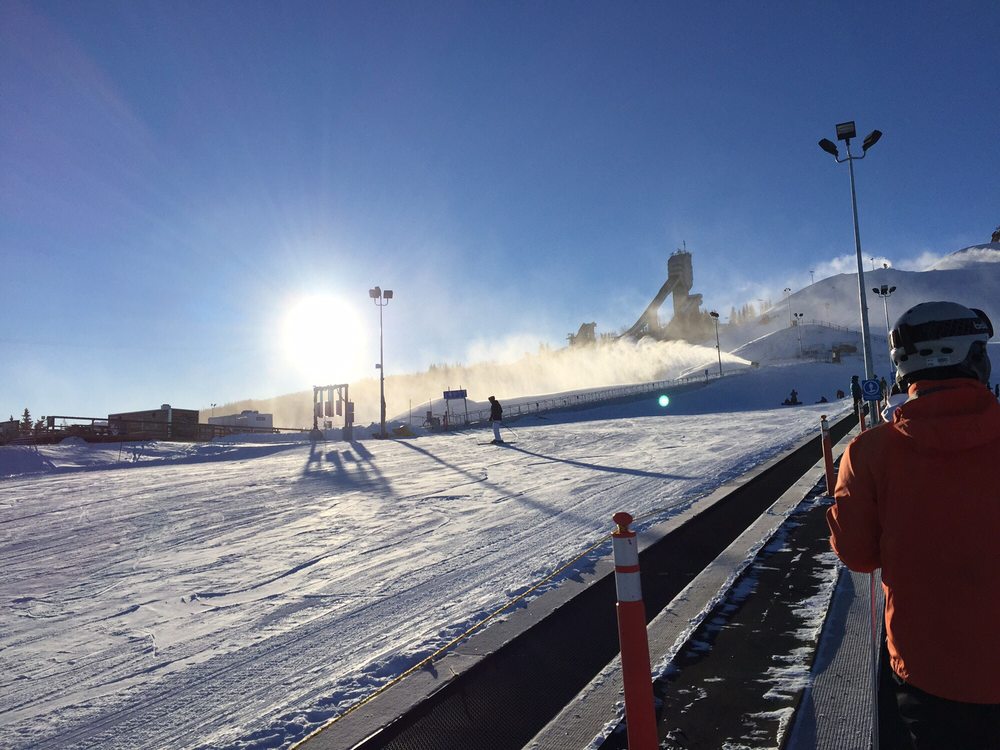 WinSport's Canada Olympic Park (COP) (formerly known as Paskapoo Ski Hill) is a ski hill and multi-purpose training and competition facility located in Calgary, Alberta, Canada, and is owned and operated by WinSport. It is currently used both for high performance athletic training and for recreational purposes by the general public. Canada Olympic Park was one of the venues for the 1988 Winter Olympics, being the primary venue for ski jumping, bobsleigh, and luge. The park is located in western Calgary, south of the Trans-Canada Highway, north of the community of Cougar Ridge and west of Bowness. In the winter, the park is also used for winter activities including downhill skiing, snowboarding, cross-country skiing, ski jumping,bobsleigh and luge. In the summer, the park is used for warm-weather activities including mountain biking, summer festivals, ski jumping training, zip-lining and summer camps. The park also has a number of indoor facilities which are operated year-round, including arenas, fitness centres, and an indoor ice track. In October 28, 2008, Calgary was chosen, among nine Canadian cities, to permanently host the nation's main sports hall of fame. The foundation and construction of the new facility was laid on donated land by the former Calgary Olympic Development Association (CODA), now called the Canadian Winter Sport Institute or WinSport Canada. The cost of the project was C$50 million (about C$30 million was used to build the venue; another C$20 million for operating costs, through an endowment fund). It was opened to the general public on July 1, 2011, to coincide with the Canada Day festivities. The former Olympic Museum and Hall of Fame location was turned into a training site for athletes, making it (OMHoF) redundant and the CSHOF the only sports-related museum there.

Really fabulous place, you would not believe all the different sports they have here it's not just skiing and snowboarding, they have you luge both in the summer and the winter and bobsled and... Read more

We stopped by to do some zip lining at the tallest, and fastest zip line in North America, as well as Bob's letting on the Olympic previous track. When we got there we were able to park in the... Read more

Loved it. Everyone's were completely amazing and literally the only thing you pay for is if you want to walk through the Canada Sports Hall of Fame which was actually pretty cool. Took pictures... Read more