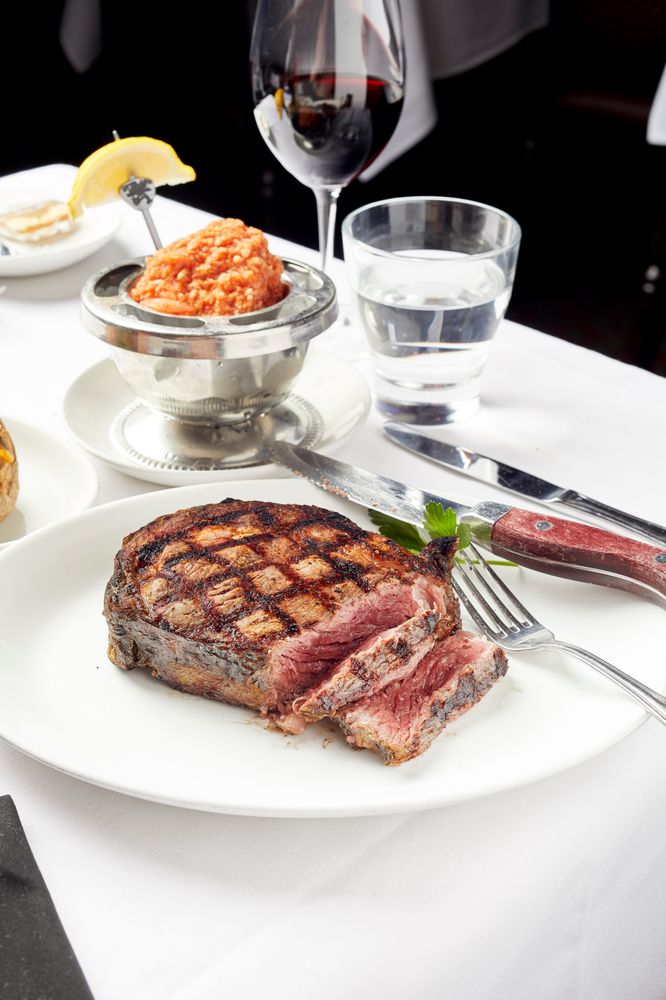 St. Elmo Steak House has been a landmark in downtown Indianapolis since 1902. It is the oldest Indianapolis steakhouse in its original location, and has earned a national reputation for its excellent steaks, seafood, chops and professional service. Founded by Joe Stahr, the restaurant was named after the patron saint of sailors, St. Elmo. Starting out with a beautiful tiger-oak back-bar purchased in Chicago, the restaurant was simply a small tavern with a basic menu. Through the years, its classic turn-of-the-century Chicago saloon decor has changed very little, beyond the inevitable expansions. From 1947 to 1986, the colorful odd-couple team of Harry Roth and Isadore Rosen skillfully guided St. Elmo to continued success before turning over the reins to veteran restauranteur Stephen Huse, the present owner. In 1997, Steve partnered with his son, Craig, who is the current operator. Through much of its history, St. Elmo was considered a dining bastion for men. It was, and still is, a place where salesmen and tycoons came to seal the deal, where attorneys and politicians strategized and plotted, where coaches and players celebrated wins and lamented losses, where celebrities came to unwind from a show. With the arrival of nearby Circle Centre Mall in 1996, St. Elmo found itself enmeshed in a dining mecca of trendy new restaurants. Huse decided to give St. Elmo a multi-million dollar makeover, providing a more customer-friendly and comfortable environment without undercutting the charm of its turn-of-the-century roots. This entailed building a large, open kitchen viewable to guests in the bar, creating more usable space in the bar and foyer, adding two additional private dining rooms and designing an award-winning wine cellar with several thousand bottles. Additional expansion has since provided three more private dining room options to accommodate large parties. Today's St. Elmo Steak House honors its past by maintaining its traditional atmosphere, professional service and outstanding refined menu. Our goal is to create unforgettable memories for you — our guest. St. Elmo was featured on Best Thing I Ever Ate!

Reviewed by
Vincent B.

One of the best steaks I've ever had. Shrimp cocktail as a starter is a must. Ordered lobster tail over ribeye. Fantastic service. Read more

Food was GREAT as usual! Service individual was THE BEST yet! Ambiance was as nice as it used to be. Entertained internationals there in the late 1970s. I would again if I still lived in... Read more

Holy goodness!! What a great place! From the moment we walked in, we were welcomed, sat immediately and greeted by our waiter, David! He is so friendly and helped us with recommendations. Ordered-... Read more