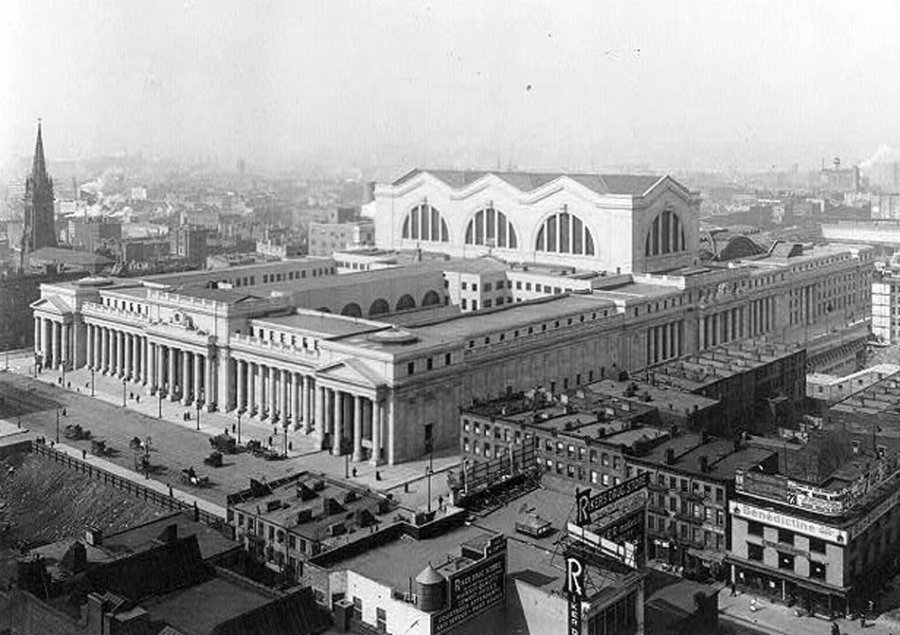 Pennsylvania Station was a historic railroad station in New York City, named for the Pennsylvania Railroad, its builder and original tenant, and shared its name with several stations in other cities. It was designed by McKim, Mead, and White and completed in 1910. The original Pennsylvania Station head house and train shed were considered a masterpiece of the Beaux-Arts style and one of the architectural jewels of New York City. These above ground portions of the station were demolished in 1963. Occupying two city blocks from Seventh Avenue to Eighth Avenue and from 31st to 33rd Streets, the original Pennsylvania Station building was 784 by 430 feet, covering an area of . It was one of the first rail terminals to separate arriving from departing passengers on two concourses. As rail usage declined in the 1950s, the Pennsylvania Railroad sold the air rights to the property and downsized the railroad station. The above ground head house and train shed of the station were demolished and replaced by Madison Square Garden and Pennsylvania Plaza between 1963 and 1969. The destruction of Pennsylvania Station galvanized support for architectural preservation across the United States, leading to the advent of modern historical preservation. The below ground concourses and waiting areas were heavily renovated during this time. However, the boarding platforms at the lowest level remain virtually untouched.

Be the first to add a review to the Pennsylvania Station.